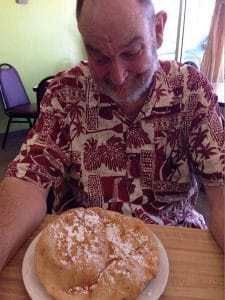 Every year, at the end of each edition of Tucson Meet Yourself our staff solicits feedback from the public, participants and key stakeholders. This process is valued tremendously in our festival organization. We learn, we reflect, we apologize, we explain, we adjust and we try to do better. Sometimes, the questions and the answers are very educational –suggesting that the work of cultural presentation is ever a “work in progress.”

Here are 6 of the most interesting questions related to food at TMY that we received last year.

There are actually not enough Asian foods represented at the Festival. Of the 50 distinct countries in Asia, only about 7 cultures from Asia are represented at TMY.

Some Asian countries share common elements in their traditional cuisines (e.g., noodles), and occasionally more than one TMY food vendor sells the same type of food. Three reasons for this are:

Oh, we are sorry someone walked away with this impression. The food at TMY is actually very affordable. In fact, compared with most other large festivals and events in the area, TMY has a significantly broader range of affordable dishes. Mostly prepared by both home cooks and small businesses, food offerings at TMY are actually cheaper than at many other large events in Tucson. We have an official policy that food vendors MUST offer a range of options to the public — from items that cost only a couple of dollars to full-plates at higher prices.

The TMY food vendors exercise great creativity and fairness in offering a range of prices and portion sizes. This image from the Lajkonik booth (Polish) at the 2015 festival offer examples of that range: 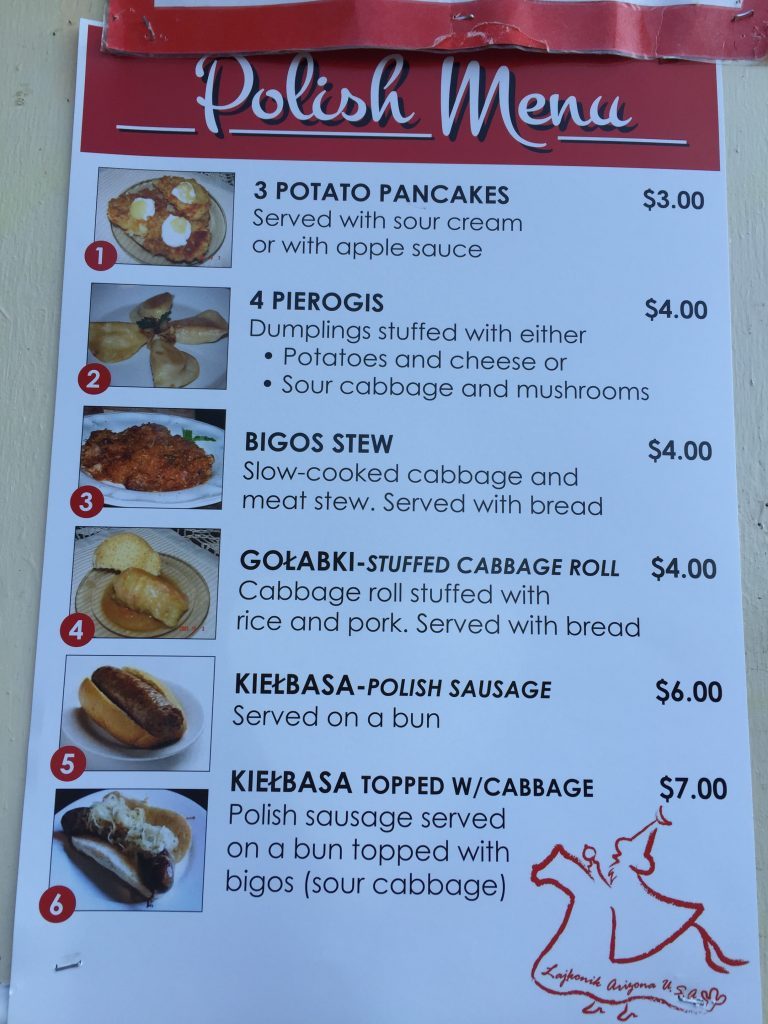 Food is one of the most elemental ways we express and continue cultural traditions. Food ties us to place, ritual, and heritage.  Whether we are rolling out raviolis in Italian neighborhoods of the Northeast or kneading the corn masa for tamales in Mexican barrios in the Southwest, we mark cultural expressions through food.

Folklorists and other social scientists often use the term “foodways” to describe the foods we eat, what they signify, and why we eat them—Connecting to culinary traditions that may be unfamiliar to us is an easy and tasty way to begin to understand people and practices from other cultures.

For example, tortillas, familiar to many in the Southwest and Mexico are often are made from flour or corn and are used to “pick up” other foods like beans, rice, and meat. Ethopian injera is a sourdough flatbread made from a grain called “teff,” and is used similarly in place of silverware to eat meats and vegetable dishes. While there are many differences between Mexico and Ethiopia, we can sometimes celebrate commonalities across foods.

Beyond discovering culinary commonalities, eating food from other places is a wonderful gateway into understanding customs and practices from other regions. The way we prepare, gather, serve, and eat foods are all activities that can reveal aspects of tradition and custom. Even TV dinners say something about who we are and how we live!

TMY is a platform, an umbrella that provides opportunities for a range of cultural and folklife expression. Each cultural group or small business makes their own decision about whether or not they have the energy and resources to participate. TMY cannot force any group to participate. We extend invitations and are always looking for diversity and entry for new food vendors.

The festival serves as a fundraiser for many of these groups and entrepreneurs. The funds raised by the different groups are reinvested for cultural transmission and preservation through support for things like scholarships, dance groups, and building a temple.

Running a food booth at TMY requires many hours of labor. Since vendor operations, cultural groups, and businesses are often small and family-run, sometimes they are prevented from participating (even if they have done so for many years), due to family or internal situations. Some groups that started when the festival was smaller have had a hard time adjusting to the growth and the complexity and cost of producing such a large event.

We try hard and we do have seating areas with shade available to the public. In 2016, we have ordered 100 such tables with umbrellas from our supplier. But given the size of the event (100,000 + folks in attendance), we can understand why it may appear to someone that we don’t have “enough.” The festival is free to the public. No fees are collected. We do rely on donations and grants to support it. Additional funds and donations would enable us to rent more tables and umbrellas!

Cultures are dynamic, living things–not static and isolated. Many immigrants or people from other regions of the United States who have moved to Tucson express their authentic cultural identity through commercial food businesses. This is part of the reality of how cultures thrive: in interaction with the marketplace. For many, many years TMY only accepted non-profit cultural clubs as food vendors, but the economics of producing the event were significantly different back then. Still, TMY does not feature any large chain restaurants or commercial food enterprises that are not Tucson-based or community-oriented. The restaurants that you see participating in TMY are authentically rooted in their own cultural communities and experiences.

Foodways: How a Festival Whets the Appetite for Culture
Next Post: 2017 Festival in the works!