Of course we celebrate the absolute uniqueness of Tucson’s culture and heritage, one rooted in the Sonoran Desert. But we also acknowledge our strong connections to California. From our ancestral indigenous communities of resistance to numerous pathways of conquest and industry, from Sonoran missions to California missions, from “old Tucson studios” to Hollywood, we have much in common with the sunshine state to the west. We even share intertwined musical legacies–from the melodies of Mexican Mariachi to our favorite folk pop superstar, Linda Rondstadt.

We also share a meaningful mission with a sister organization, the Alliance for California Traditional Arts (ACTA). Much like the Southwest Folklife Alliance, which produces TMY, ACTA serves as the California Arts Council’s official partner in serving the state’s folk and traditional arts field. We share a vision for cultural and racial equity in the region and we believe celebrating and supporting traditional arts and folklife is one way to create a society that respects plurality. ACTA’s Founder and Executive Director, Amy Kitchener, studied at UA from 1985-1987 and volunteered at TMY. She then earned a master’s degree at UCLA in Public Folklore. In 1990, she returned to conduct research at TMY, which resulted in the paper “Boiling Down the Traditions: The Reflexive Dimensions of Food at TMY,” now archived at the UA Libraries Special Collections. She wrote, “In planning a festival that would function to create community … the organizers were wise to realize the potential success of food working as a cultural mediator.”
This year, in recognition of our overlaps and commonalities, we are pleased to present guest artists from California. 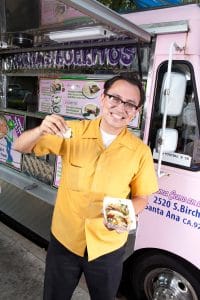 Food writer, cultural critic Gustavo Arellano brings his wise and witty commentary to TMY’s Culture Kitchen with a talk, “Back to the Futuro: The Unlikely Return of Sonoran Cuisine in Los Angeles.” Friday, Oct. 11, 5pm

Gustavo Arellano is the author of Orange County: A Personal History and Taco USA: How Mexican Food Conquered America, and a features writer for the Los Angeles Times. Former editor of OC Weekly, an alternative newspaper in Orange County, California, hepenned the award-winning “¡Ask a Mexican!,” a nationally syndicated column in which he answered any and all questions about America’s spiciest and largest minority. Gustavo is the recipient of awards ranging from the Association of Alternative Newsweeklies Best Columnist to the Los Angeles Press Club President’s Award to an Impacto Award from the National Hispanic Media Coalition, and was recognized by the California Latino Legislative Caucus with a 2008 Spirit Award for his “exceptional vision, creativity, and work ethic.” Gustavo is a lifelong resident of Orange County and is the proud son of two Mexican immigrants, one whom came to this country in the trunk of a Chevy. 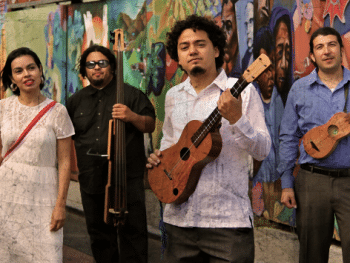 In Spanish, the word “cambalache” means exchange, which is fitting for this group of musicians from East Los Angeles who play SON JAROCHO, a regional folk form of Mexican “son” music from Veracruz. The music takes its name from “jarocho,” a colloquial term for people from Veracruz. The sounds of son jarocho are shaped by indigenous, African, and Spanish influences. Traditionally, the form invites audiences to participate in public performance gatherings called “fandangos,” celebrations with music and dance. Founded in 2009, Cambalache is led by Cesar Castro, a master luthier sonero and jarocho from Veracruz who studied and toured with El Grupo Mono Blanco, guests at TMY in 2018. Cesar began working with Chicanos in Los Angeles through Fandango Sin Fronteras, a binational exchange of music, community, and performance and eventually moved to Los Angeles to teach the form. Cambalache is comprised of Cesar Castro, Xochil Flores, Chuy Sandoval, and Juan Perez. While in town, Cambalache will work with the Tucson Jarocho Collective. 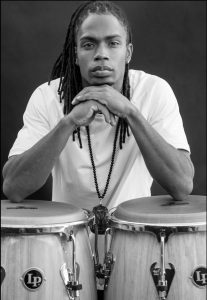 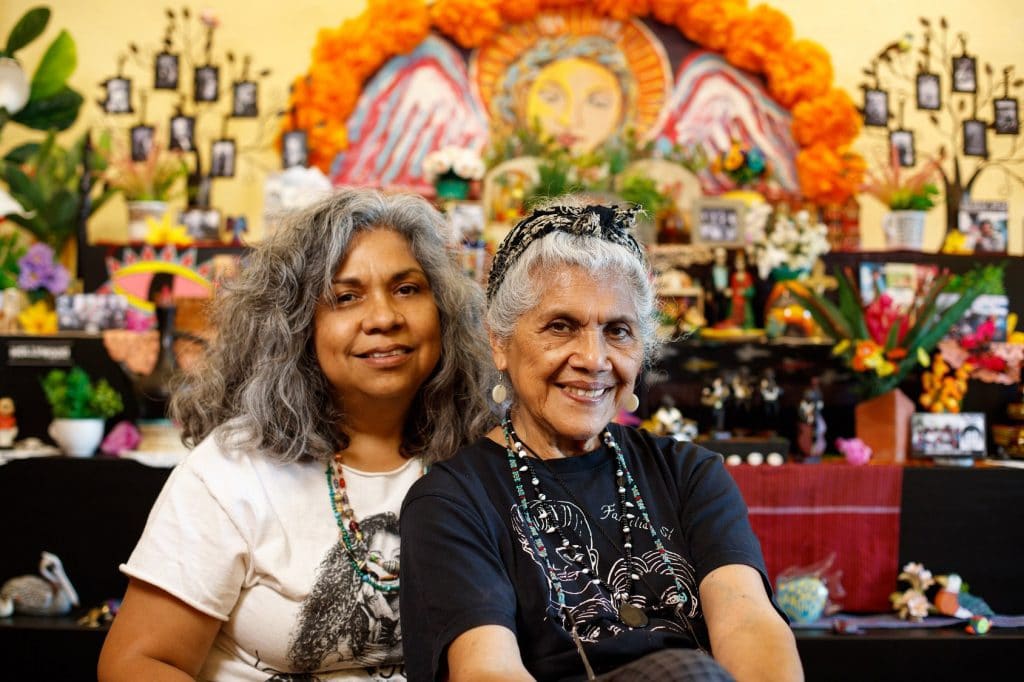 Ofelia Esparza and Rosanna Esparza Ahrens join TMY from East Los Angeles to build a large-scale replica of a family Dia De Los Muertos Altar.  Watch these master altar makers pay homage to the ancestors and join in. Bring photos of ancestors and loved ones you have lost and make a photocopy on site so you can add it to the altar. Artists will facilitate making picture frames and paper flowers to accompany photos. Photos can also be scanned on site for inclusion in the Ancestry Project, a program of the annual All Souls’ Procession that projects images on public walls during the procession (Nov. 3, 2019). With sponsorship from: Arizona End of Life Care Partnership. Read more about them here. 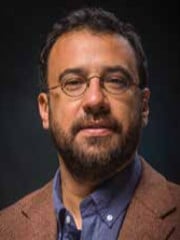 For the past six years, it has been a practice to invite a guest folklorist to the festival and offer reflections about their experience. We ask them to write a brief report to share what we are doing well, what we can improve, and what we might learn from other events and activities around the country. We have learned so much from these guests.

This year’s guest folklorist, Estevan César Azcona, is a professor in the department of Chicana and Chicano Studies at San Jose State University. A Chicanx/Latinx arts and culture specialist, Azcona’s studies and teaches Chicanx/Latinx music history and folklore, Latin American ethnomusicology, and borderlands anthropology and history. Utilizing ethnographic and archival methodologies, his work has documented cultural histories of Chicano Movement music-making and cross-border practices of Mexican regional music traditions in the U.S. Azcona was co-producer of the Smithsonian Folkways Recordings release, Rolas de Aztlán: Songs of the Chicano Movement. He has also served nationally as curator, consultant, and panelist for local and national arts service organizations, including National Performance Network (NPN) and the National Association of Latino Arts and Culture (NALAC). Azcona holds a Ph.D. in ethnomusicology from the University of Texas at Austin.